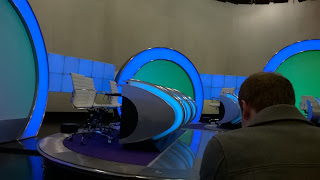 Hairstute-fears aside, if you haven’t gone along to see a TV Show recorded, I’d recommend it. Though if you’re going to see a long show like Strictly then you might want to take a particularly comfortable (yet covert) cushion.
Posted by Unknown at 19:53 No comments:

In praise of: Holby City

Waiting times are low, they are doing ground breaking (Hertzig-based) surgery and the staff are exceedingly attractive...what's not to like about Holby City?

...No, of course I mean Holby City the TV drama, not the fictional hospital itself. That would be silly.

When a TV drama has been around as long as Holby, then there is a danger of being a tad overlooked.

In fact it's fair to say that Holby has somehow slipped between the cracks a bit. Compared with soaps like 'Corrie, 'Enders and Emmerdale, it struggles to get the cover of TV Quick or even get a sniff during awards season. Yet it is plugging away, 52 weeks a year with a happily high standard of quality drama.

Not as arty as Broadchurch, not as gory as The Walking Dead (though sometimes it runs pretty close) it's dependably good TV drama that deserves more of a shout out than it currently gets, frankly. So here's a registrar heckling, prepping for theatre, big issue-dealing doff of the surgeon's cap to Holby City.

I'm the reason why Ripper Street was cancelled

There's no use pretending: I can be a bit slow on the uptake, so it's no real surprise that I've only just begun to watch Ripper Street, which was first broadcast at the tail end of 2012.

Frankly, I'm hooked and looking forward to digging into the rest of the series.

All of this means that I'm part of the problem for broadcasters who scour the ratings for clues on a series' popularity. Your sure-fire cast-iron hits are often the types that have massive overnight ratings, where popularity is not in doubt, like British Bake Off, Broadchurch, Downton, etc. The ones where you can get an old school 'water cooler moment' with your co-workers "did you see Carson launch a punch at Lord Grantham last night?"

When you move away from those massive TV hits it all gets a bit more more tricky, almost entirely because our viewing habits are getting ever more fragmented. Video recorders may have given us chance to record what was going on over on the other channel while we were watching Corrie, but the advent of Sky+, iPlayer and all the rest has given the viewer so much choice as to how and when they watch telly that it's hard to work out just how popular a programme is.

Doctor Who, for instance has an immensely loyal fan base but the iPlayer audience appears to be getting more and more important for it, often picking up in the region of a couple of million ratings after the show has first been broadcast. Numbers that it used to get in overnights instead.

When you include viewers watching on DVD box sets or Netflix/Amazon Prime/Now TV/et al, it's more tricky still.

As IT Crowd and Count Arthur Strong creator Graham Linehan noted in a recent interview with The Telegraph: "It’s so difficult to get people in front of the television these days – ratings are astonishingly low. I remember a time when it was normal for people to sit down at six o’clock and not move all night. In the past few years people have started to shake themselves out of that mindset."

Taking Ripper Street again, the first episode was broadcast by the BBC at the end of 2012 and here I am watching it three years late on DVD. The BBC took the decision to end Ripper Street following the second series, after ratings didn't hit the highs of the first series. Now I don't have any inkling if quality slid or if it felt like it was on its last legs (or if it was down to a new time slot against I'm a Celeb) as I've not watched them all yet, but in any event after an online petition Amazon Prime took Ripper Street on in a co-production with the beeb for series three.

So how can a broadcaster judge the popularity of a series? Aside from ratings or reviews, they are a bit stuck. Watching Twitter for what is trending is similarly limited too.

You can't blame broadcasters. Precisely because there is so much choice for viewers now, they surely feel that they can't afford to continue to back a show with dwindling ratings, for fear of losing viewers to competitors.

A chart combining original ratings with DVD views and online views would be hugely useful for a true measure of the popularity of a series, though it sounds like a logistical nightmare so will likely never happen.

There's an honourably long list of films that have found a strong second life on video/DVD where they failed at their first crack at the cinema, the Shawshank Redemption among them. But the ramifications are different for film and TV. A slow burning audience for a film simply means that more income will be generated over the years through DVD sales, but an audience slow to love a TV drama can mean cancellation.

In conclusion, yes I am part of the problem. Those powerful types who commission and cancel TV drama can't possibly know if a series, like Ripper Street, is going to pick up in popularity over the years despite increasingly middling ratings. Like many things in life, luck appears to have a big role to play in the world of TV drama. Will your drama catch on quick? You better hope so.
Posted by Unknown at 13:07 No comments: