While Wiggins, Pendleton and Hoy have grabbed all the headlines, cycling's other big British success story of the last decade has been cycle-rail journeys, or trips involving bikes and trains.

Numbers have sky-rocketed, up from 14 million cycle-rail journeys in 2009 to 39 million in just four years. Naturally, space is now at a premium at many train stations across the nation. Having to find room in the cycle rack to squeeze your bike into, before then having to find room in the train carriage for you to squeeze into, has been a regular joy for cycle-rail commuters.

But help is at hand (for the former at least) with rail stations upgrading their cycle parking facilities, including at Stevenage rail station.

The first block of spaces at that station have now, in April 2016, been updated and on the face of it appear to have increased capacity (though I confess I haven’t counted the number of spaces) which is certainly a good thing and will help alleviate the squeeze. 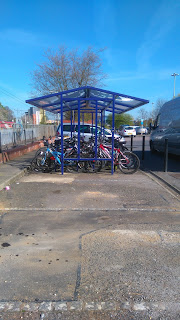 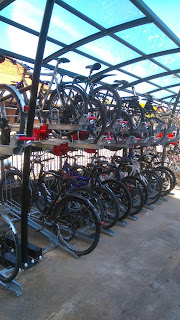 The new layout of the cycle racks has had another possibly unintended advantage: No longer are errant cyclists tempted to just lock their bike to the side of the rack and virtually block everyone else from getting to the rear half of the rack. This was more annoying that it sounded and once drove a pensioner to confess to me, while trying to negotiate the tight space, that she was sorely tempted to let down the tyres of such ‘blockers’. So that is a big tick in the box.

The new bike park is a double decker affair, which does bring about a few challenges. If, like me, you have a relatively heavy and bulky bike then those neglected cyclist arm muscles will have a shock to the system when you lug your bike up to the top level – accessed by pulling the individual ‘trays’ out and down.

The new bike park also means I’ve had to change my bike lock – I had been using a bulky Bordo Lock from ABUS, which doesn’t really work with the new stands, being better suited to a U lock or a less secure cable lock. Probably a chain would work too. Securing my bike helmet using the main lock is more cumbersome too – sticking the helmet out in the path of the neighbouring bike. Upright 'Dutch' style bikes like mine with sticky out handlebars may, perhaps ironically, struggle with the new stands.

So, in a nutshell, there are a few trifling niggles that you would expect with just about any change, but in the main, the new cycle parking spaces are a big step forward and a welcome investment, particularly if they really have given the station some much needed extra capacity for cycle parking. The bit about having to lift the bikes up to get to the less popular second level could prove a real issue, however – I couldn’t imagine hefting an e-bike up there and certainly anyone with a mildly heavy bike, or slightly short, would have trouble.
Posted by Unknown at 13:31 No comments:

Email ThisBlogThis!Share to TwitterShare to FacebookShare to Pinterest
Labels: The bicycle business

In conversation with the boss of Brompton, the biggest bicycle manufacturer in Britain

"Other Bugger's Efforts" - that's what OBE stands for, according to Brompton Bicycles' managing director Will Butler-Adams. Jonathon Harker quizzes the newly minted OBE on UK manufacturing, why bike colours matter, on engineering's poor image and the challenges of recruiting women...

Read the full article here on BikeBiz. Or read it on Issuu here. 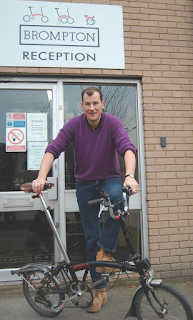 NOTE: This is an interview I did for BikeBiz back at the end of 2014. Will Butler-Adams is always good value and refreshingly candid for someone in such a prominent position in the global cycle trade.
Posted by Unknown at 14:59 No comments: